Sometimes you have to throw in the towel.  Starting over isn’t necessarily a bad thing.  I finally repainted this dice composition.  I struggled with getting the translucency rendered for hours and hours one Saturday.  Then, I worked for hours and hours the next day.  At the end of about 16 hours I felt completely defeated.  Normally, I work on a painting for about 2-4 hours. Here is the image: 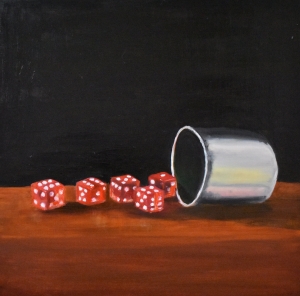 After looking at this painting for a couple of weeks I decided that I don’t like it. I can’t live with the misshapen dice. The way they look is so unnatural and wonky. I like the way I rendered the wood block and  I like the composition.  So, I had the crazy idea to start ALL OVER AGIAN with a blank canvas!!!  I worked for about 4 hours to produce this image:

The translucency is more realistic in this second rendering. It isn’t finished but it’s Friday night and I want to step back and look at it again with a fresh perspective in the morning.  I am far more satisfied with the look of the dice.  They look translucent and natural.  I still have some work to do but I feel so much happier with this ‘second chance’.

Starting over doesn’t have to be a negative thing.  Sometimes that best thing to do is give up and begin again.

Published by Art Belongs to Everyone

Remember Reflect Reform In this work, I have been exploring phenomena of memory augmentation. I experimented with reflections and cinematic images by juxtaposing photographs, paint, wood, and mylar. The direction of the work includes painting intimate, reflective, observations of augmented memories.  I began by building a cabinet of curiosities as a way to form a tableau painting and experiment with different media. Inspired by the relief paintings by artist Sally Han, I built a model of a Victorian cabinet using tenets of Darwin's theory of evolution. I painted on a variety of surfaces including wood, photographs, and adding raw lumber to the pieces. In this process, I disassembled the cabinet to give autonomy to each piece. Although I diverted from the original idea of a final installation, there was an impulse to paint larger. Adding mylar was yet another way to accentuate reflection as a part of the critical dialogue with the work. The final result offers an opportunity to remember, reflect, and reform. View more posts